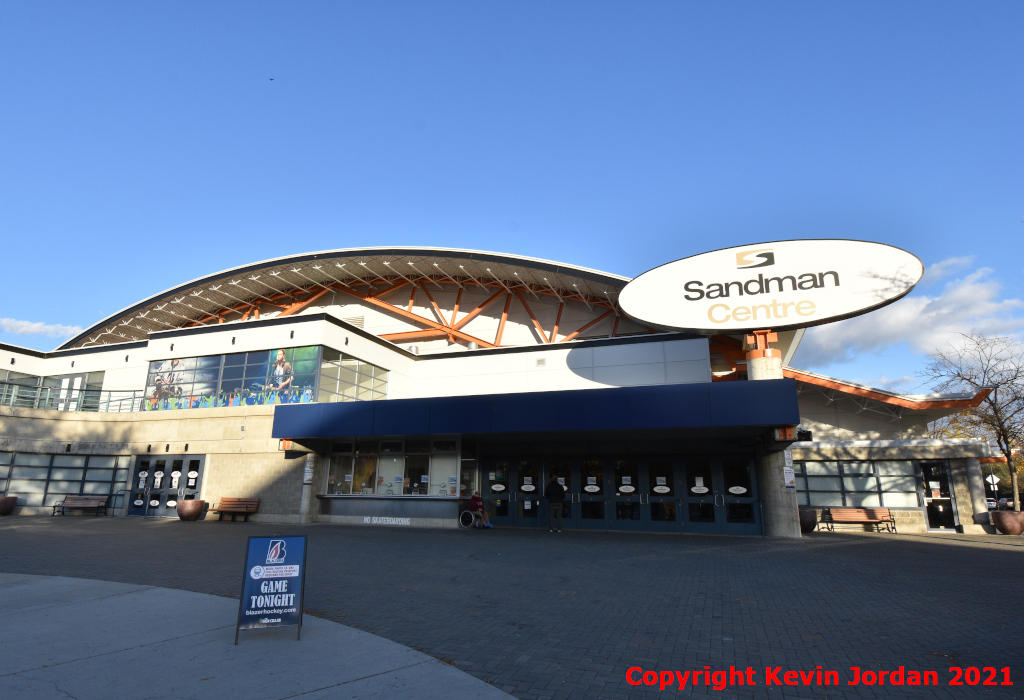 Around the time I started going to junior hockey road games in the early 2000's, the term "clone rink" started to be banded about in CHL circles. Once you've been to a few road games, you start to notice a trend in arena design - the CHL now has an absolute glut of arenas of around 4,500 to 6,000 seats, sharing a single top concourse with views of the action, comfortable seats, a suite level. Sarnia and Sault Ste. Marie in the OHL are pretty similar to Moose Jaw and Vancouver in the WHL, which are pretty similar themselves to Bathurst in the Q.

It wasn't until I visited Kamloops, though, that I finally felt like I'd found Clone Zero. Kamloops Riverside Coliseum opened in 1992, but it felt immediately familiar as I entered the building - the same concourse, the same seats, the same general layout. There are newer buildings in the CHL that don't follow the trend, but Kamloops is the earliest example of a clone rink in junior hockey, the model from which all the others were built. I was immediately interested to see what parts of the Coliseum had been copied across the country, and what parts, if any, hadn't.

The Sandman Centre is in downtown Kamloops, a short walk from the team's former home at the Memorial Arena, and near the forks of the Thompson River. It's situated in pleasant parkland with a small parking lot nearby, and the architecture is very late 1980's/early 1990's, all tubular steel and grey brick. The building is built into the side of a hill, so from the top (street) side of the rink it appears far too small to be a junior arena.

My visit to Kamloops began more-or-less when the doors opened, and I got to walk into the rink pretty much alone and see it before it got crowded. There is, as you'd expect, a top concourse leading down to the seating level. A small team store sits near the front entrance, there are concessions and washrooms throughout the concourse, and... that was pretty much it. Unlike some other clone rinks, there wasn't much to explore. It was also strange walking in to near dead-silence - the Blazers are one of the only teams I've ever seen that play no music before warmups start, so the Coliseum was eerily quiet.

When the Blazers first took the ice, though, that all changed - the music during warmups was easily the loudest I've ever encountered, ear-splittingly so. So, with no exploring to do and conversation impossible, I sat for fifteen minutes with my fingers in my ears, waiting for the din to end.

After warmups I was already prepared to write off the Blazers with a harsh review, move on, and never come back, but then the damndest thing happened. The crowd filled in - a 50% capacity sellout, in the days of COVID - and the crowd was phenomenal, loud, into the game, knowledgeable. The views of the game in the seats were good by clone rink standards, and the music was turned down to a more acceptable level. I am always a sucker for a good crowd over and above anything else at a hockey game, and Kamloops's fans are among the best out there. By partway through the first, the Blazers were already curb-stomping Victoria on the way to a 7-1 final score, and I was having a blast watching them as I warmed up to the rink.

In terms of the arena itself, as the proto-clone there were a few minor quirks that got smoothed out in later versions of the same building. The seating wasn't just limited to the standard ring, but instead Kamloops has a second deck running down both sides of the area, three additional rows of seats only. I was wishing I'd have bought seats up there, as my favourite view of a hockey game is high and close. On the one side there's even a third tier above the upper deck, high in the rafters, full of club seats. There aren't many arenas where ordinary fans can get a press box view, so Kamloops scores major points for that.

A few other minor points - washrooms aren't quite plentiful enough, and the team store wasn't quite as large as I'd liked. The concourse was narrower than it probably would be built today, but even then, the Blazers don't make use of all available space (I'd have liked a souvenir stand at the east end of the rink to combat traffic at the store). The video board was of tremendous quality, but the graphics package the team uses makes penalties in particular hard to read. These are minor inconveniences, though.

By the end of the game I'd done a complete 180 on Kamloops. I'm old enough to remember the dynastic Blazer teams of the 1990's, three-time Memorial Cup winners in four years, and even when I was too young to really appreciate the full scope of the CHL, I knew about that blue and orange team from BC with the cool logo. First I was excited to see Kamloops, then I was disappointed by the Sandman Centre after warmups. But after the game, I was grateful to have seen one of junior hockey's cornerstone franchises play at home, in front of a loud and passionate audience, and in a building I had grown to really like. Of the three arenas I saw on my first big post-pandemic road trip, Kamloops had the most traditional hockey crowd experience, and it gave me hope for a future where COVID is no longer a factor. I missed junior hockey, but I missed the noise and spectacle and atmosphere more than anything, and Kamloops was by far the best of the three I saw on my fall 2021 trip for those things.

But next time, I'm not showing up until after warmups are over. 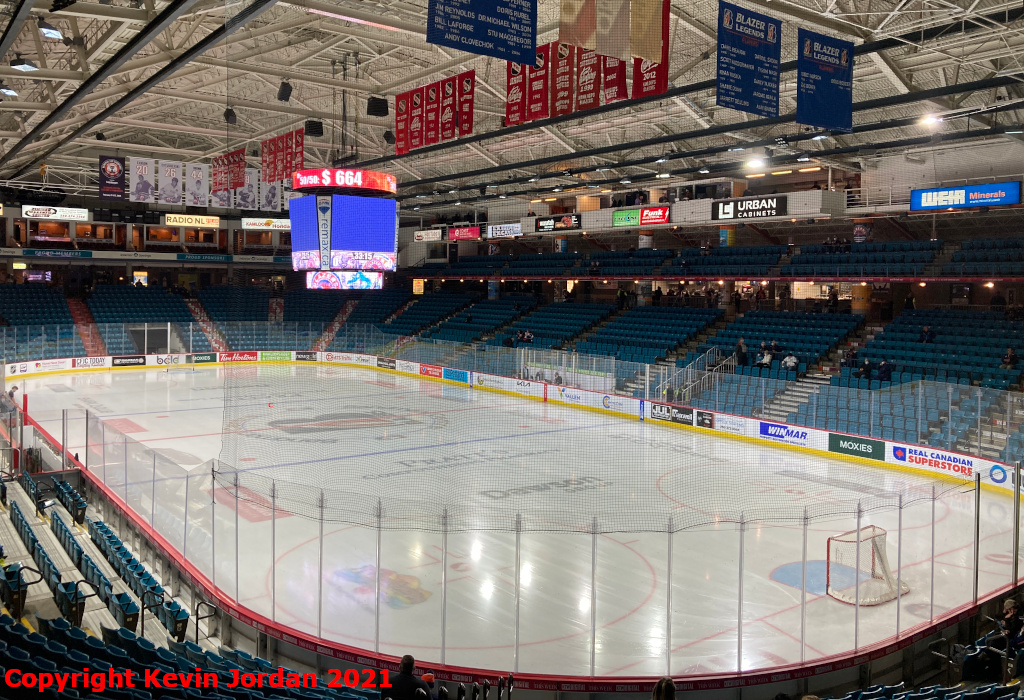 Future Developments
There are no plans to renovate or replace Sandman Centre.


Franchise History
The Blazers franchise traces back to the founding of the WHL as the one-time Estevan Bruins. In 1971 Estevan downgraded back to the Saskatchewan Junior Hockey League, and the WHL Bruins franchise moved to New Westminster. The team moved to Kamloops for the 1980-81 season under the name Kamloops Junior Oilers, and were renamed the Kamloops Blazers in 1984. They played at nearby Kamloops Memorial Arena until the 1992-93 season.