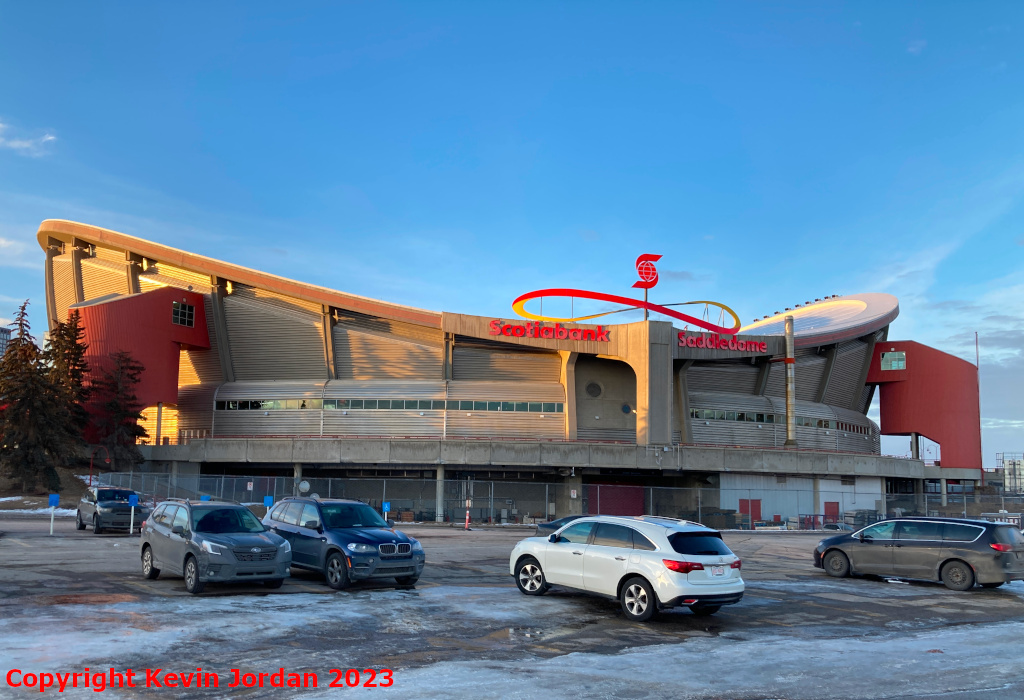 The Olympic Saddledome is the second-oldest arena in the NHL, but it's also the oldest-feeling, if that makes sense. Madison Square Garden had a billion dollars in renovations done to it over the past few years, and apart from the retro design and small capacity, it feels like a new, modern, classy hockey arena. The Saddledome, by contrast, is all exposed concrete, spartan and brutalist on the inside, and I mean that in a refreshing way. It's the last old-school arena left in the NHL, and it's worth a visit as long as it remains open.

I haven't been to a Calgary Hitmen game, but I have been to a Flames game in the fall of 2018. The arena sits on land at the city's Stampede Grounds, across from the site of the old Corral. There's lots of parking on site, but not a lot of access points, so traffic can bottleneck entering and leaving the parking lot. The arena is unmistakeable, with its trademark Pringles-shaped roof and silver cladding covering it. The influence of 1980's postmodernism is clearly visible.

Inside, the arena lobby and concourse is all reinforced concrete in a way that buildings aren't built anymore. The concourse is more than adequate to the needs of the NHL, having been built for the Olympics, which means that I'd wager for junior hockey the rink is easily overbuilt. Inside the seating bowl, the arena is on three levels, with the smallest lower bowl in the NHL and a huge 'middle bowl' containing the vast majority of the seating. Along the sides only, there is a third level up in the very uppermost reaches of the Pringle ceiling, and oddly, that level is only accessible by climbing the arena stairs in the middle of the bowl. If you're sitting along one of those aisles I can't imagine how you wouldn't have people parading by you all game long.

I've heard that Calgary Hitmen games are targeted more at a family audience in Calgary, whereas for the Flames the atmosphere can be quite intense. I'm looking forward to getting to a WHL game there in the future to compare notes to my NHL experience. 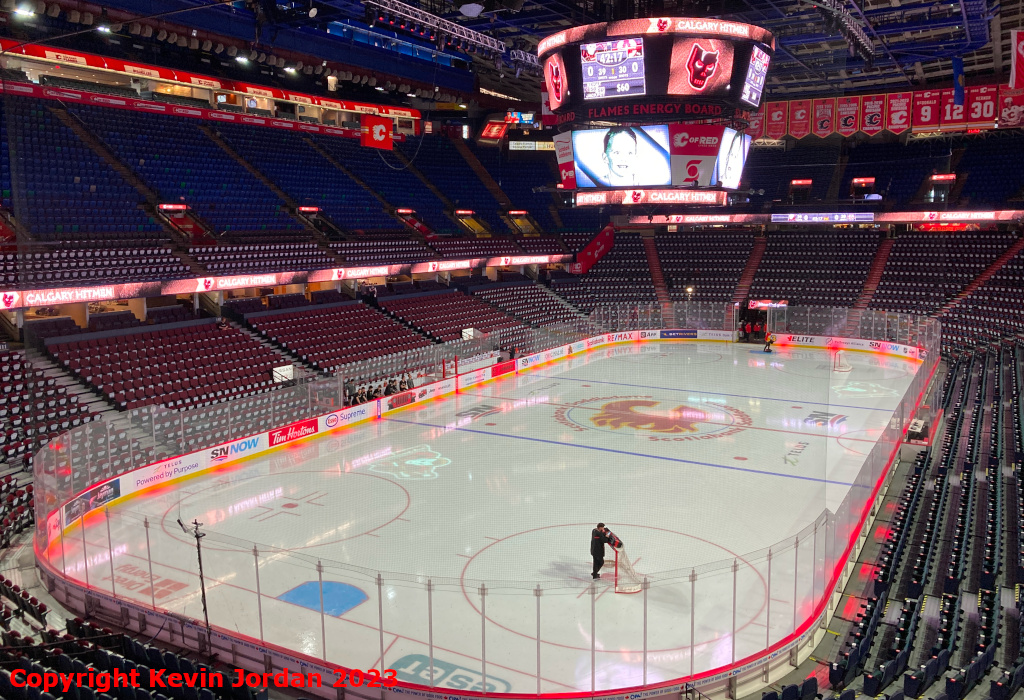 Future Developments
Being owned by the NHL Flames, the Hitmen's future is well and truly tied in with that of their parent club. The Flames have been agitating for a new arena for many years, with the Saddledome being the oldest operating arena in the NHL that hasn't had insane amounts of money poured in in renovations. The Flames had been planning to move to a new arena in Calgary, which would have also moved the Hitmen, but in late 2021 the club pulled out of the deal with the city, so for now, there are no plans to renovate or replace Scotiabank Saddledome. One expects we will hear more about the future of the team and the arena in the near future.

At the start of the 2022-23 season, the Flames did what a lot of NHL teams have been doing and relocated their AHL affiliate to the main city, so that development coaches can more easily work with both teams. The AHL Wranglers, as they're called, have relegated the Hitmen to third in the pecking order at the Saddledome, and for the 22-23 season the Hitmen will be playing a handful of games at the Seven Chiefs Sportsplex (which I haven't yet made it to). From photos, the Sportsplex isn't quite CHL standard, so where all this jockeying leaves the Hitmen is anyone's guess. As long as the team remains profitable I'm sure the Flames won't have a reason to sell them, but I can also foresee the Hitmen's eviction at some point in the future if the Flames feel they're cannibalizing the Wranglers' audience.

Franchise History
The Calgary Hitmen were founded in 1994, taking their name and original pink and black colours from professional wrestler and Calgarian Bret 'the Hitman' Hart, who owned the team at the outset. The team had a rocky start in Calgary and even spent a full season at the Stampede Corral in 1995-96 with low attendance, but the NHL Flames bought the team in 1997 and built them into the economic powerhouse they are today.

Retired Numbers
The Hitmen have only retired one number:
20 Brad Moran

But the team also has a program called "Forever a Hitmen" to honour former members of the team with banners. Honorees include the following, though numbers are not retired:
Ryan Getzlaf
Kelly Kisio
Andrew Ladd