Angel of the Winds Arena 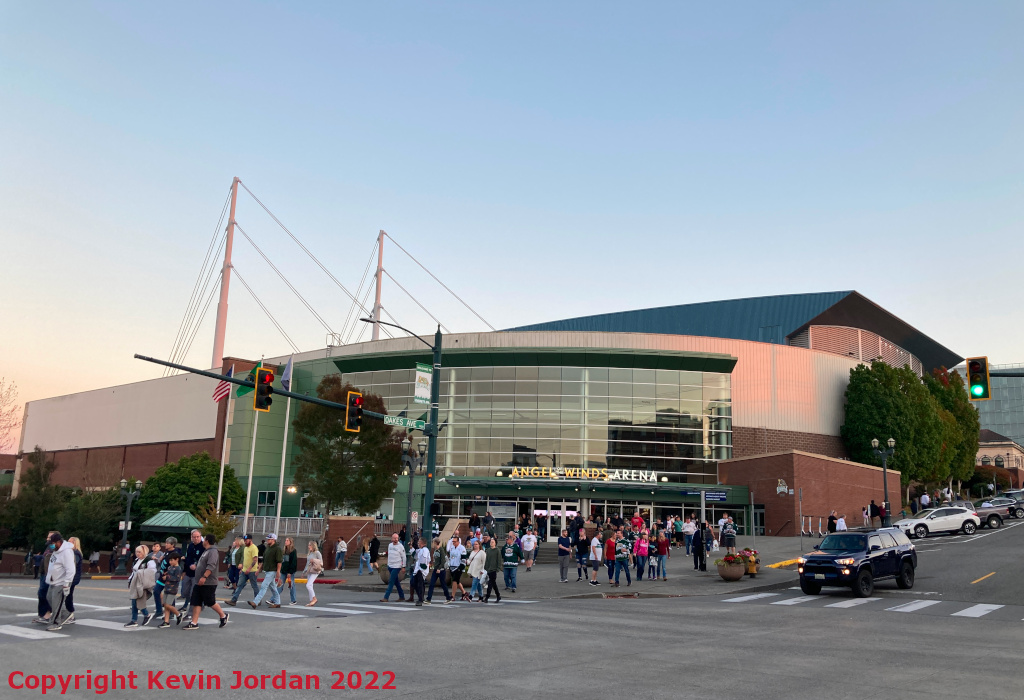 Since the team’s founding in 2003, I have always thought of the Everett Events Center as a sort of Bizarro London. In a CHL full of clone rinks, Everett’s Angel of the Winds Arena, as it’s now known, is the only one that is a cousin of the Budweiser Gardens that is the home of my Knights. It opened only a year after the Gardens, and it was of quite similar design, with a lower bowl and then a U-shaped upper level. Heck, even the team that plays there wears green! But when I made my first visit to Everett in October 2022, I discovered an arena that shared DNA with London, but was also distinct in many ways.

Everett is a northern suburb of Seattle, best known internationally as the home of the world’s largest building by volume – the massive Boeing assembly plant, located only a short drive away from the arena. Everett Events Center opened in 2003 and is a red brick building with blue siding and two massive cantilever pillars that hold the roof up. It fills an entire downtown city block, on a hillside, with the main entrance on the higher side entering directly into the arena concourse. The arena seems small from the top side of the hill, as most of the bulk is underground.

Unlike in London, there’s only one concourse – it circles the building, and every portal leads both into the lower bowl, or to stairs up to the upper one. The single concourse design was common among arenas called “Coliseum”, built from the 1960’s through the 1980’s, but I’ve never seen an arena built since the 1990’s arena boom with the setup. It’s not a problem, it’s just… weird, maybe? I don’t generally have a problem with bygone design choices making a reappearance, but the era of the single concourse died out because of massive crowd congestion between periods. The game I went to in Everett was only about half-full, so congestion in bathrooms and at food stalls wasn’t a big deal, but I can’t imagine that would remain true for a game where the rink was sold out.

The arena bowl is much the same as London’s. The capacity is slightly lower in Everett – the lower bowl isn’t quite as large – but the seating has a steeper angle, and I liked sitting in the lower bowl in Everett more than at home. In the end of the ice where the upper-level ends, the concourse is wide open to the ice and widens to include a bar as well as the booster club booth, chuck-a-puck, and an auxiliary souvenir stand. It’s a great use of space, and it’s something I wish we had in London. The bar also overlooks a secondary/practice rink and is laid out so that it can be used on non-gamedays.

The seats are all forest green – it’s always a nice touch when they install seats in team colours! The suite level is at the top of the arena, behind the upper level, which is better for the sake of the ordinary plebs in the upper deck but can’t be as good for companies spending money on suite tickets. Finally, there is a restaurant in one corner at the very top of the arena, which again is a little odd, considering how much of a money-maker hospitality can be. Most modern buildings prioritize the rich at the expense of normal people, so seeing one that bucks that trend was refreshing.

The game presentation in Everett is professional-grade, with an NHL-quality video board, and the crowd is great. Even at half capacity, the fans made a great amount of noise in support of their team. Cowbells are big in Everett, and the noise from them alone was deafening at times, but even without them the cheering and audience participation was still top-level. My only minor complaint about it was that I found the sound system volume slightly louder than it needed to be. It wasn’t to the point that I wished I had earplugs, but I think they could lower the music volume in the building by a notch or two and the experience would be better for it.

I very much enjoyed my trip to Bizarro London. Everett’s arena is the only Budweiser Gardens clone in the CHL, but there was enough about it that was different to still make it feel different. The lower bowl seating is better than at home, if I’m being honest, and the crowd is terrific. I think as a facility the Budweiser Gardens is a slightly better one, but if Everett were my local team I’d still enjoy going back over and over again.

Inside Angel of the Winds Arena 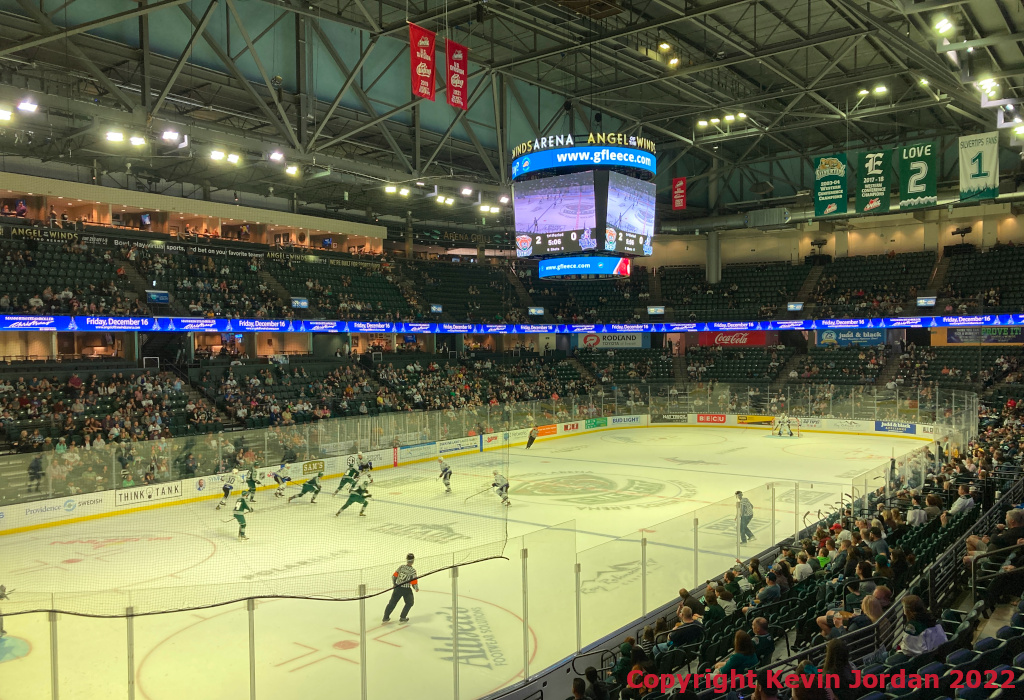 Future Developments
There are no plans to renovate or replace Angel of the Winds Arena.


Franchise History
The Silvertips were founded in 2003 as an expansion team and have played at the Events Center since the beginning.

Inside Angel of the Winds Arena 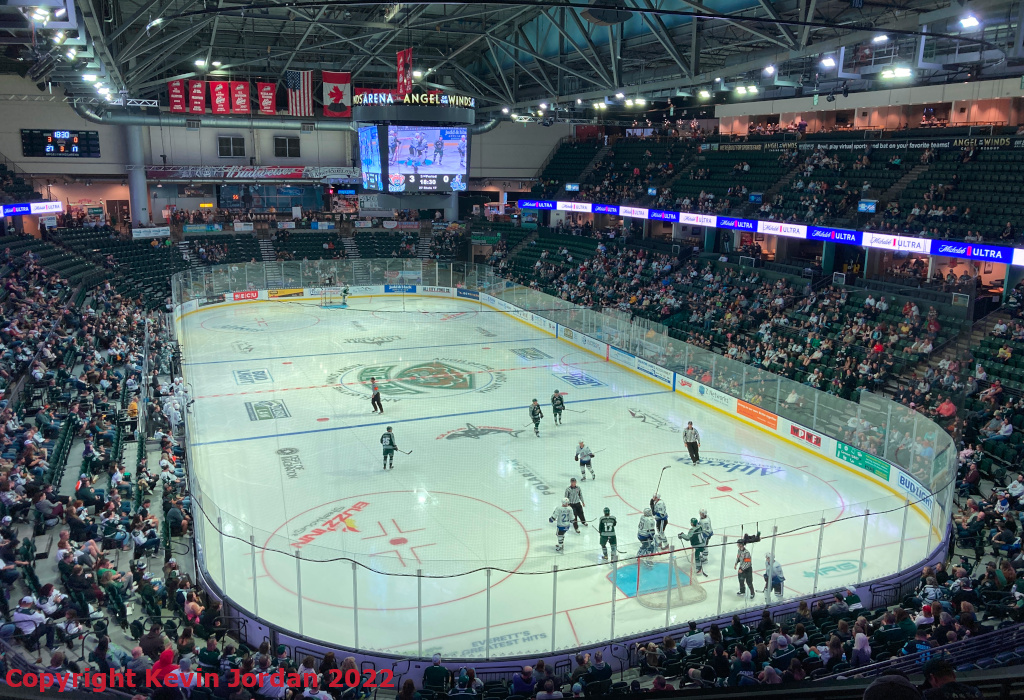