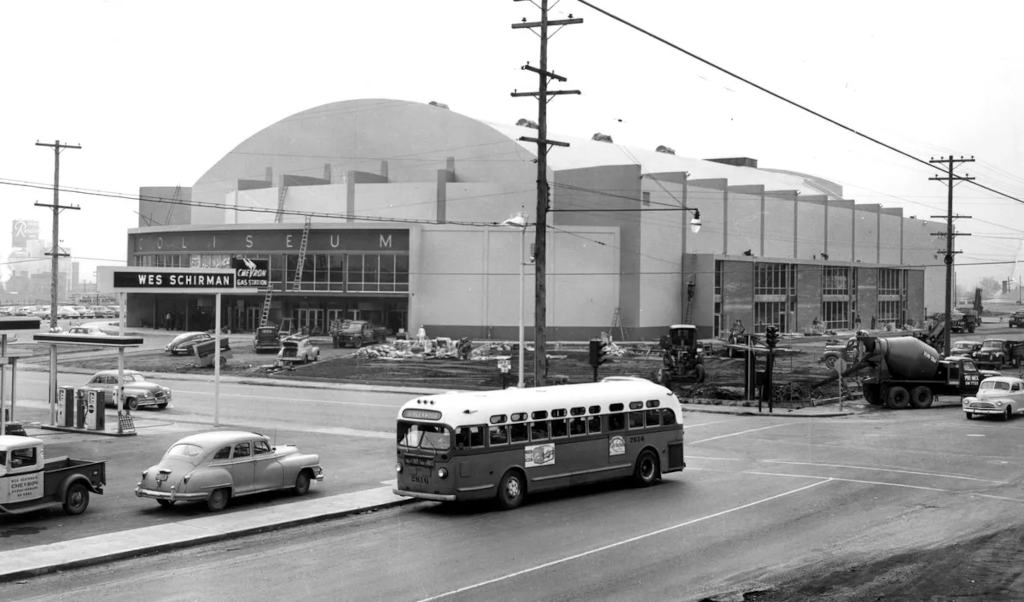 What's the Arena Like?
My first time seeing a bunch of WHL arenas on the ground was in the summer of 2015, when Mrs OHLAG and I drove across the United States to her sister's wedding in Vancouver and then back across Canada. I wasn't into the WHL at that time and had no real intention of ever doing a WHL Arena Guide, but junior hockey arenas are still an interest of mine, and since we were passing through anyway, I stopped in to check out the current or former WHL arenas in Billings, Spokane, Kamloops, Calgary, Medicine Hat, Swift Current, Moose Jaw, Weyburn and Estevan.

My interest at that time did not extend to the places where former WHL arenas used to be, which is how I drove by the site of the Spokane Coliseum and never even realized it. The Coliseum opened in 1954 and was the main arena in Spokane for forty-one years, with a capacity of 5,400. From photos on the internet, it appears that the seating was on one level in a U-shape, with a permanent stage at one end for concerts, and a concrete barrel roof.

There is a concept in historical preservation circles that a building's fortieth birthday is the most dangerous time – it's when the building is old enough to need major work to keep it viable, but not old enough for it to feel like it's worth saving (historical designation generally only happens once a building is at least fifty). If you look back at some of the most regretted demolitions around the world, huge numbers of them were around age forty, among them Penn Station in New York. When Spokane Coliseum was forty, it was starting to have roof leaking issues – the rebar in the concrete roof was rusting – and the Coliseum's small relative capacity meant it was losing out on concerts to larger arenas nearby in Boise and the college town of Pullman.

Accordingly, the Coliseum closed in 1995 and was replaced by Spokane Veterans Memorial Arena, which was built just south of the Coliseum on what had been the Coliseum's parking lot. The Arena is double the capacity that the Coliseum was, and Spokane once again was able to capitalize on its presence as the largest urban centre within hours in any direction. When the Arena opened, the Coliseum was demolished, and the site is now parking for the Arena – it was set back from the road just north of where Spokane Arena now is. When I eventually make it to a Chiefs game I'll be sure to take a picture for posterity.

What's It Used for Today?
Spokane Coliseum was located just north of the current Spokane Arena. From satellite photos, you can still tell where the building's footprint was by the angle of the wheelchair parking spots in the lot, which trace the contours of the former arena.

Return to Spokane Arena
Return to the Main Menu