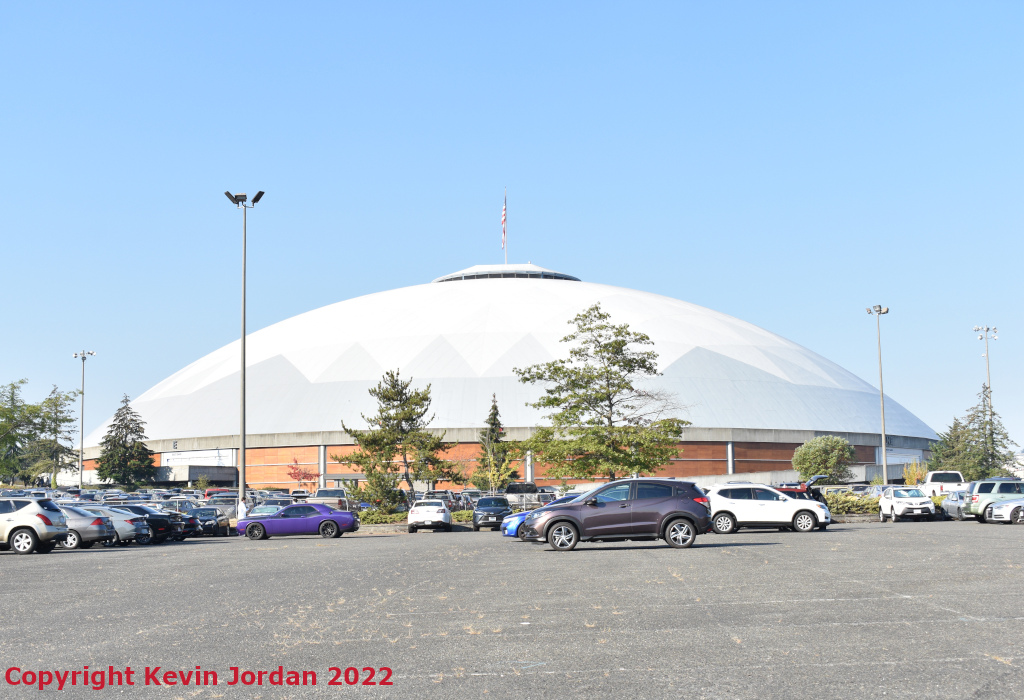 What Was the Arena Like?
The Tacoma Dome is a weird building. It opened in 1983 with a signature geodesic roof, and unlike virtually all other indoor arenas in the world, there’s almost no fixed seating inside the building, which makes it uniquely adaptable, but also kind of a jack of all trades, master of none kind of rink. With such a high ceiling and the field expandable to accommodate anything from cricket to football, when the Tacoma Dome hosted the Rockets, it was a uniquely terrible hockey arena. The seating was all temporary, and the cavernous space meant any crowd noise quickly dissipated.

The Dome still stands in Tacoma, right beside the interstate and across the street from the Lemay Automotive Museum, one of America’s best. In spite of its location near downtown, there are parking lots surrounding it, and it feels kind of like the Pontiac Silverdome or other suburban stadiums of its era – a blob anchoring an ocean of concrete. From the outside, at least, the Tacoma Dome is spectacular, a massive silver bubble with an American flag atop it. The Dome only hosted the WHL between 1991 and 1995, and from what I understand, there has hardly been ice inside it since 2002, when the last hockey tenant packed up and left. It seems unlikely in this day and age that a multi-purpose stadium would ever host hockey again – if nothing else, the Seattle Thunderbirds are 22 miles closer to Tacoma now than they were in the early 90’s.

Ray Marcham says: "The Tacoma Dome is the ultimate multi-purpose arena - and, frankly, not good for any sport. It hosts American football, soccer, basketball, hockey and indoor soccer. The side seats for Rockets games were horrible - the pitch was too shallow. The front row of seats were still 50 feet away from the ice, and the arena floor was the main concourse. There were four rows of temp seats set up along the boards to try and give it a real hockey feel, but it didn't work. There are no corner seats, as the seating is much like an old-style English football stadium. Except when Tacoma played Seattle, they didn't draw well. There was a reason they went to Kelowna as fast as they could."

What's the Arena Used For Today?
A true multi-purpose venue, Tacoma Dome hosts the annual Washington State football and basketball tournaments, along with concerts, monster trucks, and anything else that can be reasonably hosted indoors.