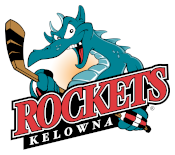 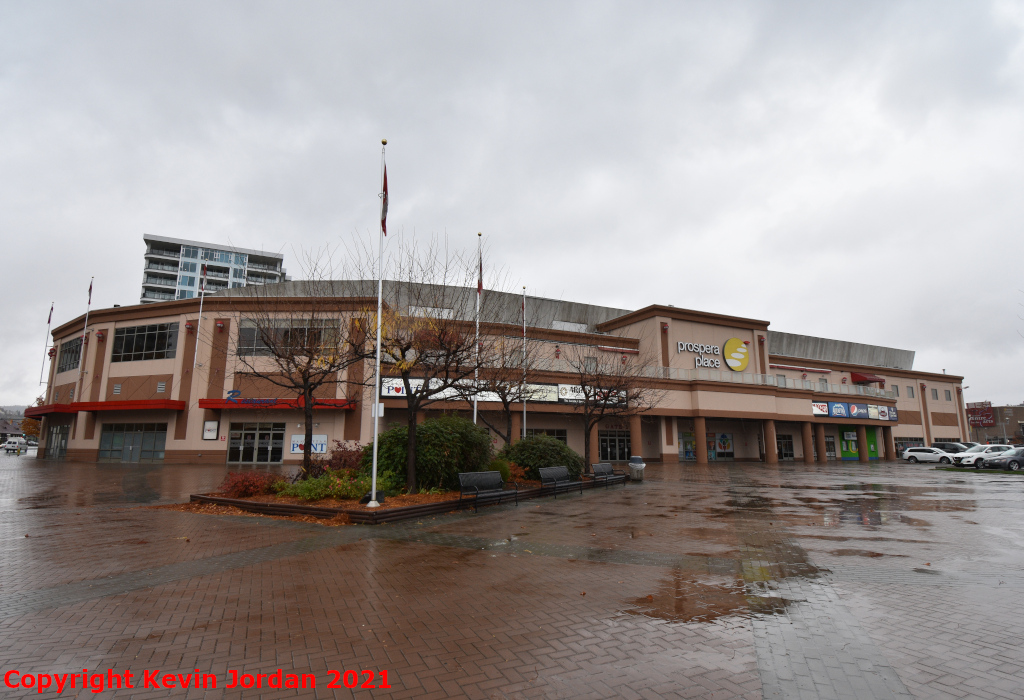 Kelowna's Prospera Place is the first WHL arena I can ever really remember wanting to visit. This had nothing to do with the arena or the city or the team, mind you, and everything to do with the 2004 Memorial Cup. My hometown London Knights made it within one game of the Memorial Cup in 1999, but with my being in high school at the time, even the comparatively short trip to Ottawa would have been too big of a commitment both in time and money for a teenager. Five years later, I was in university, which was finished by mid-May. The Knights were driving deep into the OHL playoffs that year, with the best team (on paper) in the CHL, and man, I wanted them to win, and I wanted to go to Kelowna.

As it turns out, of course, the Knights lost in seven in the Western Conference Finals to the Guelph Storm, who easily swept Mississauga in the finals and took the OHL's place at the 2004 Memmer. Seeing the Knights play in, and win, a Memorial Cup waited until the next year, and I have to admit that seeing them take it at home was even better than winning in Kelowna would have been. It all worked out in the end for me, and Kelowna was put on the back burner for quite a long time.

But this is ultimately a review of my trip to Kelowna, which finally happened, better late than never, in the fall of 2022. Kelowna is among the most beautiful cities in Canada, nestled on both sides of Okanagan Lake in a valley between mountains, and Prospera Place, their arena, stands within walking distance of the lakeshore on the edge of the city's downtown. The setting is pretty typical of newer downtown arenas, built on enough land so that there's a small parking lot on site. The building's architecture is blandly inoffensive; sandy browns and taupes and a big sign announcing the facility's name.

My first impression walking into the rink was that it felt an awful lot like Victoria, both owing to its larger capacity than most CHL buildings as well as a spartan, community feel. Twenty-plus years on from Prospera Place's opening, we build arenas now with luxury facilities, common areas for hanging out between periods, and many different ways to separate patrons from their money. Around the turn of the millennium, arenas like Kelowna's, and particularly those built on a municipal budget, were built in the most bare-bones way possible. Prospera Place has a wide, basic concourse painted in team colours, which I love to see, and murals of past Rockets painted in a charmingly amateurish way on the walls. There's a tiny team store in one corner off the lobby, and that's about it.

The seating bowl in Kelowna feels big; all one level of blue seats apart from the club seats along one side, which are burgundy. There are banners hanging all the way down one side of the ice illustrating Kelowna's long, proud team history. Much like Victoria, there are suites and a press box along the sides, a restaurant behind one end, and standing room behind the other. It's perhaps unfair to criticize Kelowna for being like Victoria given that Kelowna was built first; if anything, Victoria is a clone of Kelowna. But the two buildings are very, very similar, cloney even by clone rink standards.

By the end of the game I saw in Kelowna, my overarching impression of the arena was that Prospera Place and the Rockets were the most generic CHL experience I've ever had. If you averaged the other 59 arenas down to a completely middle of the road, No Name Brands "CHL Arena", Kelowna would be it. Kelowna does everything well: nothing outstanding, nothing bad. This is not intended as criticism, either - too many places have something to criticize, and Kelowna doesn't.

The "League Average" experience in Kelowna even boils down to the identity of the team that plays there. The name of the team is the Rockets, left over from their move from Tacoma, but in their entire history in town they've never had a Rocket logo, and a space theme, which could be very cool if done well, is nowhere to be found. The team's logo is famously Ogopogo, Okanagan Lake's own mythical Loch Ness Monster creature, but what Ogopogo has to do with Rockets has never been explained to me. Meanwhile, the team's mascot, for reasons unknown, is a raccoon. It's true that I have no attachment to the Rockets the way I'm sure the locals do, but it strikes me that streamlining the team's identity into a common name, logo and mascot would go a long way towards easing the generic feeling.

I had been so excited to see Kelowna back in 2004, even if attending the Memorial Cup that year would probably have always remained a pipe dream. I'm glad I finally got there a mere 18 years later, but someday, if I were to rank all sixty arenas once I've done them all, I'm certain Kelowna would slot comfortably right in the middle. As CHL experiences go, it's one of the least memorable I've had - even as I write this a week and a half later, it's hard to remember fine details - but I have no criticism or complaints either, which makes a solid platform to build on if the team ever wanted to truly stand out. 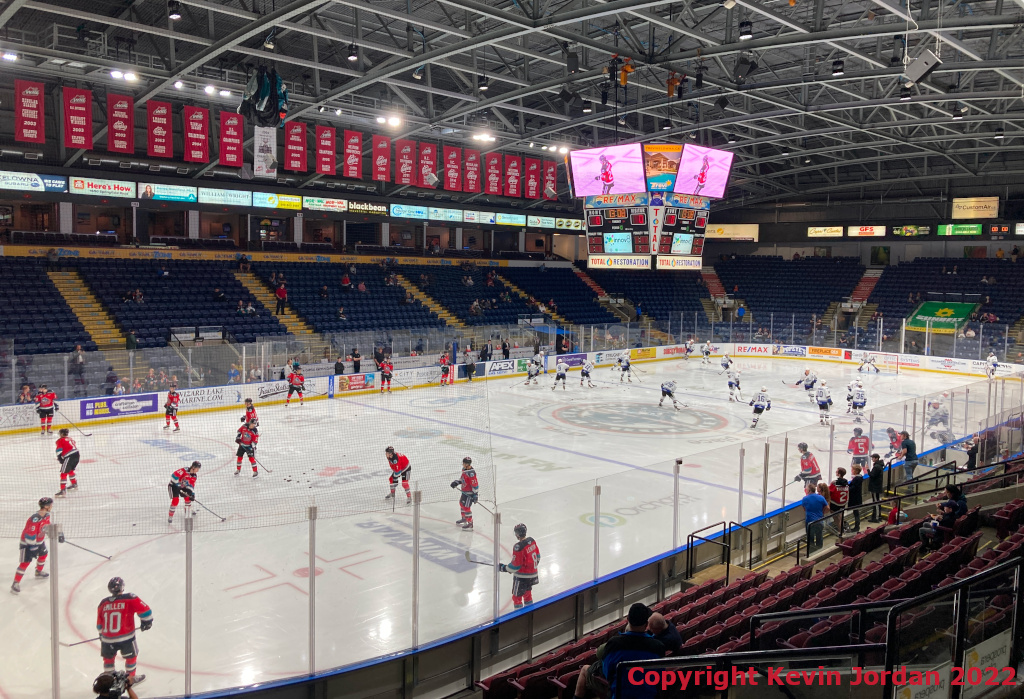 Future Developments
Despite having been awarded the 2020 Memorial Cup that never happened, Prospera Place was told it needed some $7 million in upgrades if it ever wanted to host another one, for some reason. The arena's food, beverage and washroom services are all slightly below where a modern rink would be, and the arena's caulking, weatherstripping, ventilation, roof drains, lighting, security system, fire alarm system and the dressing rooms are all in line for upgrades as well in order to keep it in service for another 20 years. As of the last I'd heard the city and province were still negotiating who was going to pay for it all.


Franchise History
The Rockets began in 1991 in Tacoma, Washington, playing out of the cavernous Tacoma Dome. They were never successful there, and after four seasons the team moved to the Okanagan. They played four seasons at tiny Kelowna Memorial Arena while their new arena was being built.