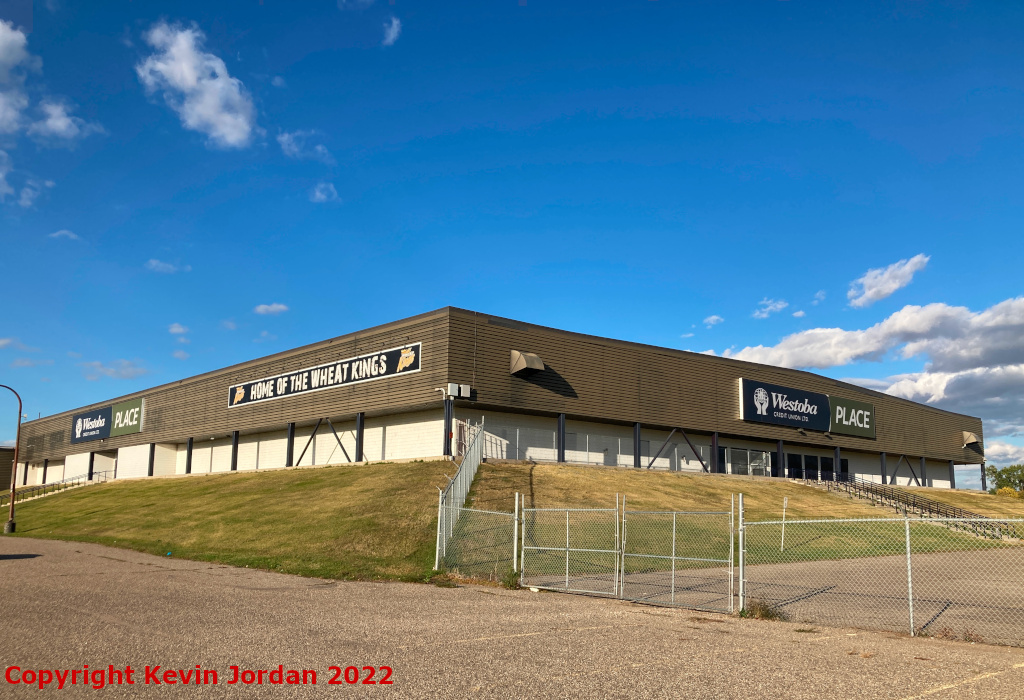 Of course they played the song; early in the first period. Gord Downie was a hockey fan, and I can’t imagine that the wonderfully evocative name of the Brandon Wheat Kings didn’t inspire the Tragically Hip to write the finest ballad in their entire repertoire, even though it’s ultimately a song about a wrongful conviction in Saskatoon. Furthermore, another great Hip tune, ‘At the Hundredth Meridian”, also has a Brandon connection, as 100 degrees West longitude sits just west of the city. The Brandon Wheat Kings have always represented the Canadian prairies for me; along with wide open flatlands, wheat fields, bison, grain elevators and long, straight two-lane roads from nowhere to nothing much. And Brandon’s Keystone Centre, now one of the oldest arenas in the WHL, fits right in as a home for the team.

The Keystone Centre sits on the Brandon fairgrounds and is, by area, probably the largest building in the CHL. Blame Manitoba winters or something, but all the fair buildings are connected, and the complex includes two other community rinks, another former community rink (ManEx Arena, once home to the Wheaties), a restaurant, a hotel, and agricultural exhibition halls. The arena, now called Westoba Place for a corporate sponsor, is at the far southern end of the complex, and from the road it doesn’t look like much – a low, squat building with a dark brown roof. It reminded me quite a bit of the Moncton Coliseum, another early-70’s rink.

Entry to the Keystone Centre is into a low-ceilinged hallway where turnstiles open into the single concourse. The arena is basic and bare-bones, with one top concourse overlooking a U-shaped seating bowl. Unlike a lot of older arenas, there is no second concourse under the seats, or if there is, it’s not open to the public during games. The ceiling remains low, and the arena feels dark and claustrophobic. I actually mean that as a compliment. Too many rinks these days are as light and airy as a greenhouse, but hockey is a dark, occasionally violent game, and playing in Brandon’s dark dungeon would be intimidating as hell to visiting teams.

That’s basically the Keystone Centre. There are washrooms in the corners, souvenir stands and concessions in the concourse, and that’s about it. In the end with no seating, there’s just a black-painted wall with a few windows (suites, maybe?) and a stage where the team had an actual band playing during the intermissions. A Twitter correspondent told me that years ago they had to install a gate separating the two sides of the stage, as the dressing rooms are on either side of it, and years ago Dave Semenko and Saskatoon’s Wes George continued fighting on stage after being ejected from the game!

The atmosphere in Brandon was pretty standard for the CHL. I attended the Wheat Kings’ 2022-23 season-opener against Winnipeg, and the opening night match against a local rival would naturally have raised the stakes somewhat, but I found the crowd to be polite and somewhat reserved in the usual Canadian way. Perhaps the atmosphere improves in the playoffs, but I found Brandon’s atmosphere to just be… okay. Music volume was fine, presentation was fine, the video board was fine; none of it exceptional and none of it poor.

As I’ve attended more and more games across the CHL, I’ve naturally started comparing arenas more and more, and Brandon mostly reminded me of the J.D. McArthur Arena in Owen Sound. Both rinks are dark, low-ceilinged older buildings with great, welcoming fans and a ton of red seats. People across the OHL love going to Owen Sound for the hospitality, and I can imagine Brandon being comparable. The Keystone Centre was the first new, purpose-built arena constructed for a WHL team, opening to replace ancient Wheat City Arena. With the passage of time, it is now the second-oldest arena in the WHL, and while I’m sure a new arena may come someday for Brandon, I hope the Keystone Centre lasts forever. The walls really are lined all yellow grey and sinister, and while there's no photos of Diefenbaker or Pearson, it still fits Wheat City, the Wheat Kings, and, well, pretty things. 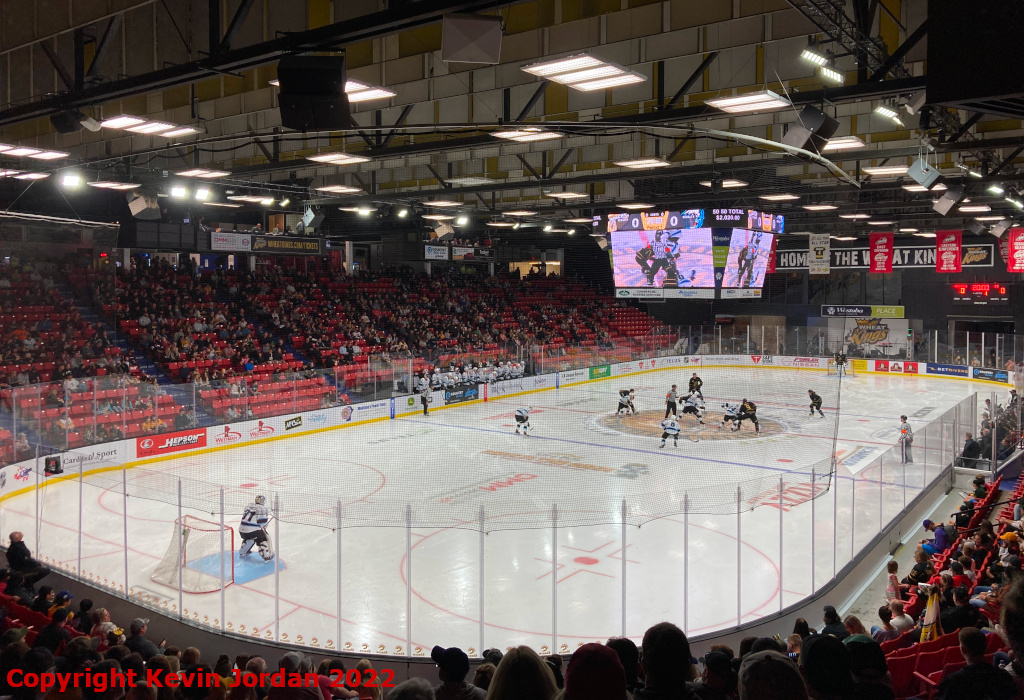 Future Developments
There are no plans to renovate or replace Westoba Place.


Franchise History
The Brandon Wheat Kings have existed in one form or another since 1936, playing in the Manitoba Junior League from their founding up to 1967. They won the MJHL eight times, and even appeared in the Memorial Cup in 1949. They made the jump to the WHL in the league's second year. I don't know where they played back when Wheat City Arena was still being used as an armoury, but they played there from 1947 until its closure in 1970. Between 1970 and 1973 the Wheaties played at tiny Manex Arena, and moved a short walk away into the Keystone Centre when it opened in 1973. The Royal Manitoba Winter Fair has occasionally evicted the Wheaties during the playoffs, and over the years they've played home games at MTS Centre in Winnipeg and Credit Union Place in Dauphin, Manitoba. 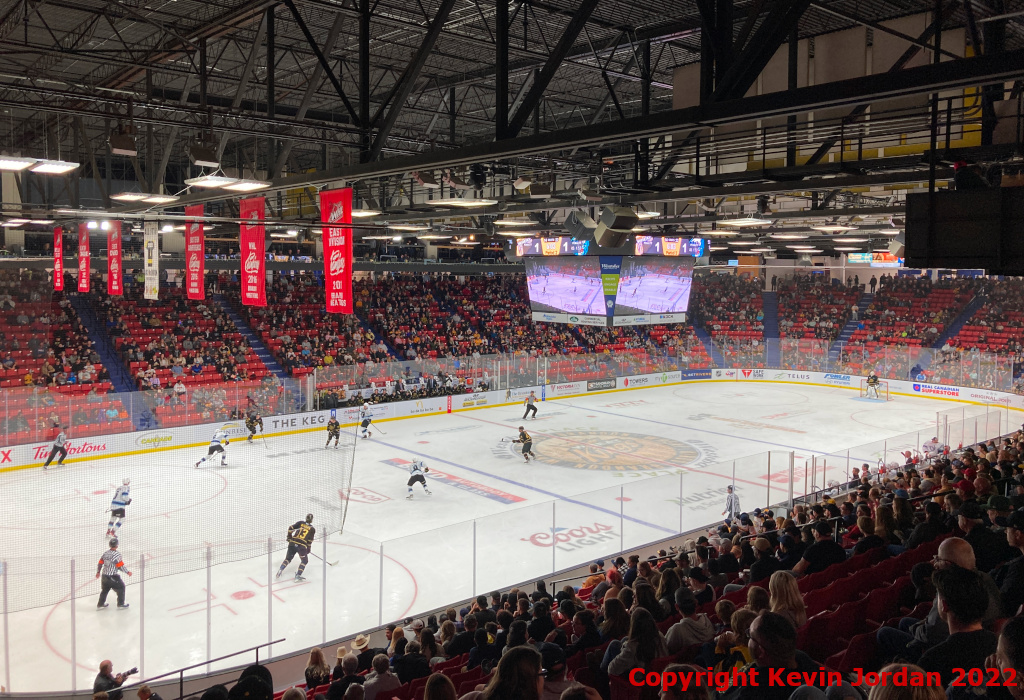